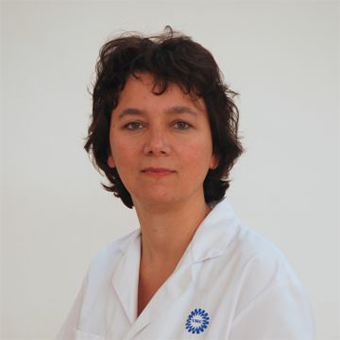 Trained as a medical doctor and internist-nephrologist, Marianne Verhaar always combined her clinical work with basic, translational and clinical research. After her Cum Laude PhD in Vascular Biology (1999) and next to her work as consultant nephrologist, she established the research laboratory for Regenerative Nephrology and Vascular Biology within the department of Nephrology and Hypertension at the UMCU. In 2009 she was visiting professor of Regenerative Nephrology at the New York Medical College and in 2014 she was appointed chair of the department of Nephrology and Hypertension. She is chair of the RM&SC program at the UMC Utrecht and director of the Master’s Program RM and Technology between TU/e and UU.

Marianne Verhaar has received many research grants, including NWO VENI, VIDI and ASPASIA grants, and two large NWO Translational Adult Stem cell (TAS) grants for innovative research on new applications for adult stem cells. Recently, a prestigious national grant was awarded to the multicenter Reconnect Consortium (led and coordinated by Verhaar) by CVON, a cardiovascular program funded by the Dutch Heart Foundation. She and her group actively participate in several (inter)national consortia, including projects on regenerative nephrology and development of the wearable artificial kidney.

The general aim is to improve care for patients with cardiovascular and chronic kidney disease, particularly by bringing new vascular and renal regenerative treatments and innovations in renal replacement therapies to clinical practice. One important research line focuses on the role of stem and progenitor cells or cellular products in vascular and renal regeneration. Verhaar was the initiator and principal investigator of the JUVENTAS trial, the largest clinical trial to date to study safety, feasibility and clinical effects of bone marrow-derived progenitor cell administration in patients with critical limb ischemia. Currently, her group is working on optimization of cell therapy for critical limb ischemia and preparing a follow-up clinical trial, starting 2017. In a separate clinical trial, the group will investigate safety and efficacy of mesenchymal stem cell administration in patients with peripheral vascular complications related to systemic sclerosis. Verhaar also pioneered translational research in kidney regeneration, showing the potential of progenitor cells in animal models for chronic kidney disease. In collaboration with the Eindhoven University of Technology, vascular progenitor cells are studied with regard to in situ tissue engineering of small-diameter arteries and vascular access grafts for hemodialysis.

Recently, a more fundamental research line was initiated, together with the Hubrecht Institute (prof Hans Clevers), on kidney stem cells and organoids. They have successfully generated organoids from adult kidney tissue as well as from cells isolated from human urine. These adult-derived human kidney organoids allow modeling of kidney development and disease but may also be used for regenerative medicine purposes, i.e. generation of transplantable kidney tissue.

Another research line focuses on the development of a wearable and, ultimately, implantable artificial kidney. Together with the Dutch Kidney Foundation, several academic centers and private partners, Verhaar’s group has developed a prototype, based on dialysate regeneration by sorbent and enzyme technology.