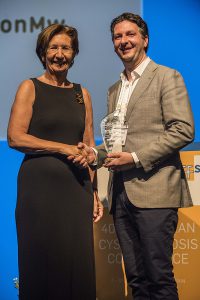 The prestigous European Cystic Fibrosis Society Awarded is presented to researchers who have significantly contributed to the understanding of cystic fibrosis or the treatment or care of patients with cystic fibrosis. Researchers are nominated for the award.

The following is adapted from the UMC Utrecht website.

At the 40th conference of the European Cystic Fibrosis Society in Seville, medical microbiologist Dr. Jeffrey Beekman received the prestigious annual ECFS Award. He received the award for the most impactful work in the field of CF (Tissue Gland Disease) in the past 5 years.

Jeffrey was appointed in 2008 as head of the CF lab at the Wilhemina Kinderziekenhuis (WKZ, Wilhemina Children’s Hospital) lung department. He is a pioneer in translational medicine and has developed a method for individualized treatment of CF patients. Taking stem cells from the intestines of patients with CF, Jeffrey’s group can predict whether or not a particular medicine will work. Doctors can therefore more easily select the right drugs for optimal treatment of each individual patient.

The ECSF selection committee report states that Jeffrey’s robust publication record, in Nature, Cell, Stem Cell and Science Translational Medicine, provides evidence of his impact in this area of research. In addition, his CF organoid model has also received international attention and generated more attention for CF. The committee considers Jeffrey an example of a successful scientist with great impact for patients and the European Cystic Fibrosis Society; he more than deserves the ECFS award 2017.